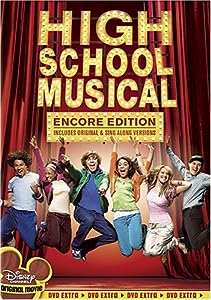 Disney's High School Musical Director: Lewis Jones Designer: Greg Clarke Lighting: Tim Panitz Musical Director: Andrew Eunson Vocal Coach: Sita Borhani Choreographer: Kath Davis The matinee performance of High School Musical which I saw this week was full of families; it was a Sunday afternoon after all.  They loved it; they cheered, they screamed ... heavens, it was like the good old days of the Beatles back in the 60s, and if that doesn't date me, nothing will.  Of course, the series of Disney movies had prepared the kids and their adults for the stage show, and I suspect for many of the audience, it was their first experience of live performance.  If so, then it should bring them back again and again.  I believe audience members had the principals lined up after the show for autographs  during the week.  Now there's fame for you! The Empire's community musical productions are always eye-poppingly good, and are led by a professional production team of director, designer, musical director, and choreographer.  As a result, production values are always high.  Amateur performers - actors, dancers, and musicians - learn on the job under the mentorship and tutelage of professionals.  Over the years since the annual (now twice-yearly) musicals have been in production, many Empire alumni have gone on to further performance studies and professional careers. As to High School Musical ... well, whilst this reviewer found whatever plot there was to be corny in the extreme, and that it was difficult to separate one song from another - they all sounded the same to me - I loved the production realisation on the Empire's big pros-arch stage.  Greg Clarke and Lewis Jones the designer-director team we've seen at work on many former Empire productions worked their usual magic supported by Musical Director Andrew Eunson and Choreographer Kath Davis.   Despite my reservations about the book and the music, there was no doubting the energy and the terrific singing-dancing and acting talent that exploded from the stage of  Toowoomba's Empire theatre.  The cast didn't stand still long enough for a head-count, but I'd say about 40 actors - all of whom, except for the two 'adult' cast members, looked to be about 17 - got the opportunity to work in a wondefully realised version of the show.  Add to the roll-call professional and mentored backstage technicians, creatives, musicians and front of house volunteer staff (the Empire's legendary Friends' Group), and you have an outstanding community theatre program, a model for the rest and one for the city to be proud of.