Review: Rumour Has It: 60 minutes inside Adele – The Little Red Company at Judith Wright Centre of Contemporary Art 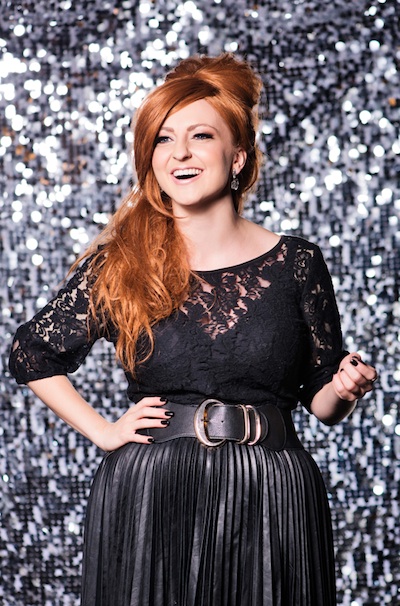 Confession – until last year when I heard Naomi Price was appearing in a stand-up piece (Cheer the Fuck Up, Adele) for the Broadway Unplugged series at Stockholm Syndrome, I assumed Adele was a character she had created. Then (old fogey me) I found out there was a real Adele (Adele Laurie Blue Adkins) singer-songwriter, multi-instrumentalist – a hugely talented young Englishwoman. OK, intrigued now I listened to some of her music (thank you Spotify), checked out the considerable discography and the awards (my goodness and still so young) and then there was SKYFALL and the Best Song Oscar and … well, there you go.

So, I guess I have to thank Naomi Price for introducing me some time back to the fantastic (real-life) Adele. As I listened to Adele and her songs for the first time, what came back to me was the sound and spirit of some of the great rock, R&B and jazz divas of the past like Aretha and Janis and Reba – also first-name goddesses to me and many others.

And then, last night,  Ms Price (another talented, young Brit) brought her Adele to life in the cheeky, gutsy, quite stunningly good  Rumour Has It …  Devised by Naomi and collaborator Adam Brunes, with original musical arrangements by Jason McGregor, Michael Manikus and Ms Price herself, it’s now playing a sold out (or was close to last night), 3 night season at the Judith Wright Centre in Brisbane’s Brunswick Street.

First up, though, top-hat tip to the Judy for providing the support and venue for the cabaret artists and chamber musical productions in town. It’s a cosy space made for around just under 300 in its current cabaret set-up. Lit intimately by Jason Glenwright the audience is spread around the room at little tables and chairs. You can  bring in a drink from the bar and just relax into the ambience, and relax the full room did on opening night, and we didn’t miss a note. Huge applause to the sound-guy who finessed the EQ mix so fabulously well; you need a credit in the programme!  Too often musicals are spoiled by poor sound mixing; this was one of the best I’ve heard. Naomi/Adele is joined on stage by the Adele Big Band: Musical Director Jason McGregor (guitar), Andrew Johnson (Bass), Mik Easterman (Drums), and Brett Fowler (Piano). Backing vocals are by Rachel Everett-Jones, Luke Kennedy and Laisiasa Utovou.

The songs you will know and love if you’re a fan of Adele. Even if, like me, you’re something of a newbie you will get the chance to hear them sung live with heart and soul and terrific technique by the gorgeous Naomi Price whose control, big, beautiful, warm voice and sassiness make for a perfect combination. Her vocal arrangements (along with Luke Kennedy) bring Adele’s songs to the stage in a powerhouse performance that never flags for a second.

Rumour Has It (title taken from a track on Ms Adkin’s second studio album 21) pulls together many of the big numbers with a running commentary on Adele’s life – it’s an extended monologue that feels like a conversation with friends. It’s irreverent, deliciously wicked, and funny, mouthy stuff as you might expect of Adele. You saw her Oscar speech, right? Know what I’m sayin’? Naomi Price’s impersonation of the girl from Tottenham – from the big, red ‘do’ through dialect right down to the black nail polish – are spot on but, just in case you think Adele is all she has, the quicksilver, complete transformation into her drop-in guests: Céline Dion, Taylor Swift and Amy Winehouse brings the house down.

I loved the way the show ends with a generous gesture and gracious acknowledgement of the musical talent that The Little Red Company have put together for this production. The band and backing singers each get 32 bars or so to strut their own good stuff. Nice work, Adele!

Fortunately, the show and these artists are getting further exposure. They’ve already played the Brisbane Cabaret Festival, Chapel off Chapel in Melbourne, the Slide Lounge Sydney and the Arts Centre on the Gold Coast, and are heading to the Noosa Long Weekend as well as the Melbourne Cabaret Festival – lucky Noosa and Melbourne. Other tour dates are in the wind. Meanwhile, Brisbane and the great south-east, get one of those remaining tickets now for the Adele Up Late 10pm show for Friday night, and don’t make her sweat bullets on ANZAC Day … sorry, had to steal that one!

And, thanks to the wonders of social media, we’re delighted to learn that the aforesaid ‘sound-guy,’ ladies and gentlemen, is Mr Jamie Taylor! You can follow him on Twitter @jamie_aep where he styles himself ‘audio-guy, Guitarist, Bassist.’ We weren’t too far off! Thanks Jamie.